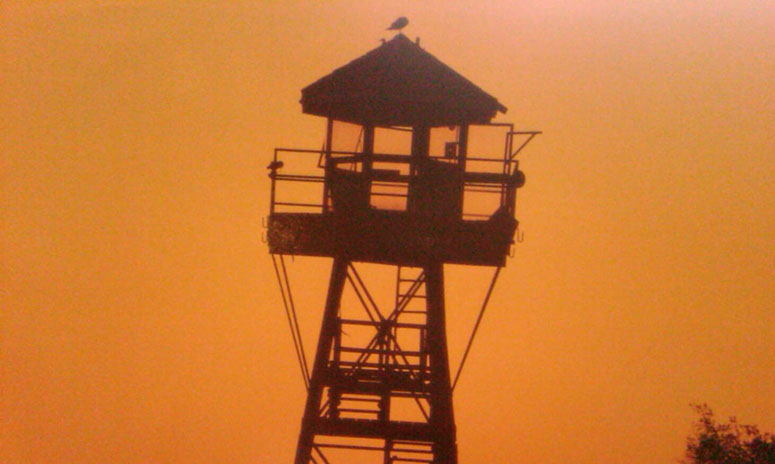 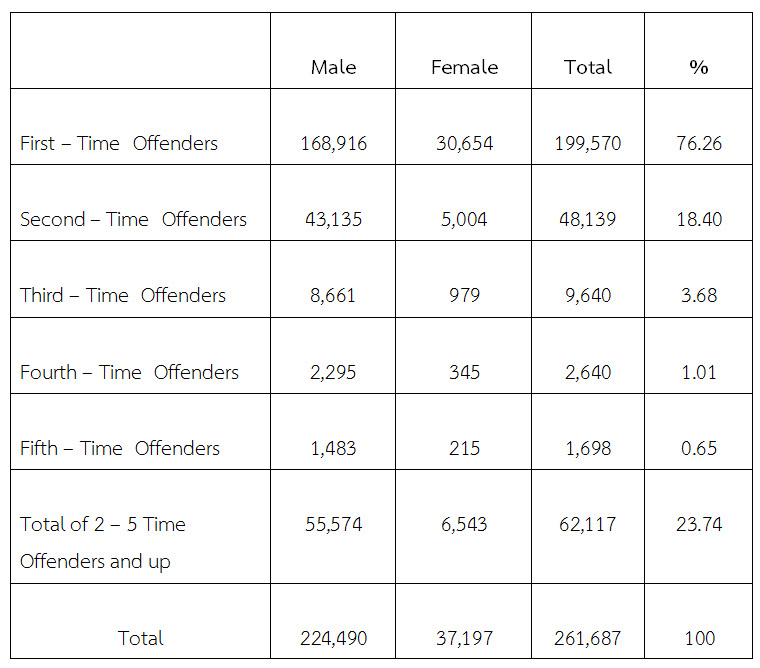 Source: Planning Division, Department of corrections as of April 1 , 2016

When comparing the recidivism rates in Table 1 with other countries, it is found that the rates in Thailand is lower than those in western countries, such as France (59 per cent), Canada (41 per cent), Germany (48 per cent) and the Netherlands (48 per cent) . But comparing such rates shall be very careful because the statistics and its data collection on the reoffending of each country, and even in the same country, are different.

In Thailand, the recidivism rates shown in Table 1 were actually calculated from the total number of sentenced or convicted prisoners that were detained in prisons at any certain time by considering how many prisoners who were repeat offenders for two or three or four times or more, and comparing in percentage among the total sentenced prisoners. In other words, calculating the number of repeat offenders in this way is calculated on the basis of all prisoners incarcerated at the current number of prisoners, not the calculation of those acquitted and released from prison in a period, for instance, one year, two years or three years. Therefore any prisoners without considering of how long they have been released to society, once they return to prison again by any cases under the imprisonment of two times or over, they shall be considered as repeat offenders.

In determining any prisoner whether as a repeat offender or not, it relies on prisoner records and imprisonment warrant. The indictment specifies additional penalty under Section 92 and Section 93 of the Thai Criminal Code, including information from the prisoners themselves.

The former calculation method of recidivism rates of Thailand in Table 1 is different from the methods used abroad that mostly rely on the calculation of released prisoners from prisons or other correctional institutions who are rearrested by the police for any new crimes, reconvicted and return to prisons later within one year, or three-year period or more. It is worth noting that such calculation methods are widely used in many countries in particular, countries with effective person tracking and identifying systems. To give an example, the Bureau of Justice Statistics (BJS) of the United States conducted a 3 and 5 – year follow up study of 404,638 prisoners who were released from prisons in 2005 in 30 states. According to the findings, 67.8 percent of them were rearrested within three years and 76.6 percent within five years. Interestingly, 56.7 percent of them were arrested within the first year after release. The majority of them or about 82.1 percent and 76.9 percent committed property crimes and offences relating to illicit drug respectively .

In addition, the statistics in Table 1 could not specify precisely the period of time after release when they reoffended although the Section 92 and Section 93 of the Thai Criminal Code set the time duration. Also, they could not indicate that such recidivists had been released on parole or under good time allowance schemes. Besides, the figures in Table 1 did not include the data of those who might be previously detained in juvenile detention centers because only the record of persons under prison sentence will be taken into consideration.

Another crucial point, the recidivism rates in Table 1 indicated only the statistics of convicted prisoners which, therefore, cannot reflect the real figures of those commit further crimes. More importantly, as they are the overall percentage, they cannot be used as the tool to measure the rates in specific area, or in a group of prisoners having been attending any particular treatment activities or projects, such as in the case of sex offenders, it cannot examine the efficiency and effectiveness of the treatment programs for sex offenders. However, in a group of prisoners released by the Royal Pardon, there are means to track the recidivism of released inmates but only in some occasions and in some years.

A New Look of Recidivism Rates in Thailand

In the past two years, Thailand’s Department of Corrections has changed the new method to measure recidivism to be in accordance with international practices. This includes the calculation of released prisoners each year and focuses on the number of those re-admitted to prisons afterwards. By matching the 13-digit national identification numbers of released prisoners in each cohort with the recorded prisoners’ ID numbers in the existing database of prison system, the calculation can be accurately made within 3 follow-up periods after release: one year; two years and three years. According to the new measurement, widely known as ‘Recstats or Recidivism Statistics’, the recidivism rates in Thailand are displayed in Table 2.

Again there are, however, several points to be further discussed regarding such new method of calculation as follows:

As a result of abovementioned conditions when comparing the rates with those in other western countries as shown in Table 3, the recidivism rates in Thailand are relatively low .

Nevertheless, in order to consider these figures as the success and effectiveness in rehabilitation and treatment of prisoners, such comparison of recidivism rates in different countries has the following limitations:

In the first place, the difference can be derived from dissimilar methods of collecting the data since each country has its own approach. For instance, some nations start the data collection at the stage of arrest, while various countries identify persons as recidivists once they are resent to prison, either as the sentenced or unsentenced prisoners. In some prison systems, only data on reconviction and reimprisonment will be calculated as recidivism. Therefore, it could be said that the universal definition of recidivism has remained under ongoing discussion and there has not been any concluded version yet. In addition, the accuracy and reliability of data recorded in the system also lead to contrasting results.

Secondly, in the prison system whose recidivism rates are higher than others, it should be highlighted that the classification or screening process plays an important role. In reality, if only dangerous and hardcore prisoners are sent to prison on the grounds that the screening mechanism is effective; the recidivism rates in such country will be soaring because the offenders are too hard to rehabilitate. Conversely, the weak screening process in any country could turn prison into a residence where criminals by mistakes or unintentional offenders are detained. Consequently, the recidivism rates of the latter tend to be quite low as the majority of them which is the calculation base for the total rates does not have great tendency to reoffend after release.

In a similar vein, when comparing the figures of those released under parole scheme, their recidivism rates are significantly lower than prisoners serving full prison term until the end of sentence. The main reason is that prisoners eligible for parole are usually well-behaved and provided with regular support and follow-up. Besides, recidivism is also connected with the type of offence, provided that the drug-related offenders tend to become recidivists more than other types of criminals. Because of this, the countries where most of their prisoners are drug-related, not normal offenders are likely to have high recidivism rates.

Third, it is believed that released prisoners who have strong immunity will not return to commit crimes. Even so, in the outside world, there are many different factors that cannot under complete control. Some prisoners are released to their good and happy families, while some of them return to previous society surrounded with causes leading to criminal offences, i.e. a slum widespread of drugs abuse and broken families; or a severe unemployment crisis. Thus, the circumstance and social environment of each society are also the fundamental elements in determining the reoffending rates. To put it simply, the high or low figures are not totally based on the rehabilitation and treatment programs behind bars despite these days the recidivism rates are still acknowledged as an important tool in evaluating the success and effectiveness of treatment of prisoners.

Recidivism rates are considered as a popular tool in evaluating the effectiveness of prison system in different countries. However, there are still statistical limitations to make a comparison between nations, such as the method to collect data; the screening process of offenders to be released from prison; as well as the environment of society outside. As a result, these factors must be taken into consideration when evaluating or comparing the recidivism rates.

Reoffending or recidivism rates are one of the commonly accepted criteria of success for the treatment of offenders in prisons and detention centers as well as those taking non-custodial measures or undergoing community-based treatment, bothadult and juvenile offenders. In other words, the recidivism rates are the assessment of ex-prisoners to measure whether they can reintegrate into society and adapt themselves to the rules, regulations and social conditions without returning to commit further crimes after release. While many scholars maintain that the focus onrecidivism rates is still subject to some restrictions asin reality there are other uncontrollable factors leading to reoffending of ex-inmates, the ex-inmates should be, because of the treatment programs of prisoners, able to resist and be immune to all circumstances driven to recommit crimes.

Although the recidivism rates are widely perceived as an effective tool forrepresenting the achievement in the treatment of prisoners, there are still some disagreement on the patterns of measurement between countries and even between different projects and studies in the same country.As a consequence, when comparing the recidivism rates it is very important to look at the criteria and measurement of the statistics as well as the approach to evaluate the data ineach particular country and context.

In Thailand, as shown on the Department of Corrections’ statistical report, the recidivism rates in 2016 were 23.74 per cent or 62,117 recidivists among the total 261,687 convicted inmates. These figures indicated that among all convicted prisoners inside Thai prisons in 2016, about 23 per cent of them were repeat offenders. According to the statistics, the second-time and third-time offenders were 48,139 and 9,640 respectively. Considering the prisoners convicted for the fourth crime, there are 2,640 while about 1,968 sentenced prisoners were fifth-time offenders. The detail of these statistics can be shown in Table I.