The Criminology Study in Thailand

Although the study on crime and punishment has been carried out in Thailand for a long time, it could be said that the systematic study, known as ‘Criminology’ wasformally introduced nearly 80 yearsago by the foreign legal experts and some Thai scholars who graduated from abroad and started to sharethe criminological knowledge in Thai universities. This includedthe first textbook, entitled“Criminology” forMaster’s Degree students which marked the birth of criminology study in Thailand and fosteredgradual development and advancement in many academic institutions.

Criminology, a scientific study of crime and criminal behavior, was first introduced to Thailand around 1934-1935 bysome professors of law. One of themwasProfessor Dr. H. Agour,a French criminologist, who wasat that time a lecturer atThammasat University. During his academic tenure, Professor Agoursuccessfully published a textbook on criminology and penology, which may be considered as the beginning of criminology study in Thailand.(1)

Since criminology was initially emerged from the legal academia at Thammasat University, it has been deeply rooted and intrinsically entrenched in the study of law. The strong sense from the perspective of law in criminology study still remainsthe same these days. In fact, criminologyis regarded as one of the core subjects that every law studentmust take.To put it simply,for an undergraduate degree (LL.B), criminology is offered to all students, either as an optional or a compulsory subject. As for a Master of Law degree (LL.M), criminology can be also found, in the law departments of different universities, as a relevant program in a module in Criminal Law and Criminal Justice Administration.

However, apart from the strong development in the Faculty of Law, criminology study has been also firmly established in the Department of Sociology, Faculty of Political Science, Chulalongkorn University since 1959. Under the lead of Professor SerinPunnahithanon who was awarded a degree in Criminological Sociology from the U.S.,the criminology study from the perspective of sociological aspects was initially run at the Faculty of Political Science, Chulalongkorn University. In addition, there werenumerous criminological articlespublished in the Journal of Social Sciences of Chulalongkorn University.(2) That was the starting point of the sociological criminology course which has been now offered in various faculties of Social Sciences, especially in the Department of Sociology and Anthropology.

It could be considered that the advancement in criminological science which was occurred in both Sociology Department and Faculty of Law appeared to be successful.Nevertheless, in1978 most criminology courses,with the core concepts and influences from the western world, tended to become more independent from sociological and legal spheres. (3) In other words, the criminology in Thailand started to increasingly focus on an interdisciplinary study, different from traditional sociological and legal approaches, even though it is still a course provided in the faculties of Social Sciences, Political Science or Public Administration.

Nowadays, the study of criminology, at the undergraduate, graduate and Ph.D. Levels in Thailand, is recognized as an interdisciplinary field taught invarious faculties of Social Sciencesor  Departments in universities. Although there is no School of Criminology or Faculty of Criminology specifically established, some universities are likely to offer criminology program in the Faculty of Social Sciences, Political Science, and Police Sciences, for example, the programs at Chulalongkorn University, Mahidol University, Rangsit University and Royal Police Cadet Academy.Besides, there are graduate programs in Criminal Law and Criminal Justice taught in Law faculties at many universities. Some outstanding programs are those provided at the Faculty of Law of Thammasat University, Chulalongkorn University, Ramkhamhaeng University and DhurakijBundit University.

The summary of differences between criminology program in Sociology Departmentor Faculty of Social Sciences and criminal justice program in the Faculty of Law can be seen in Table 1. 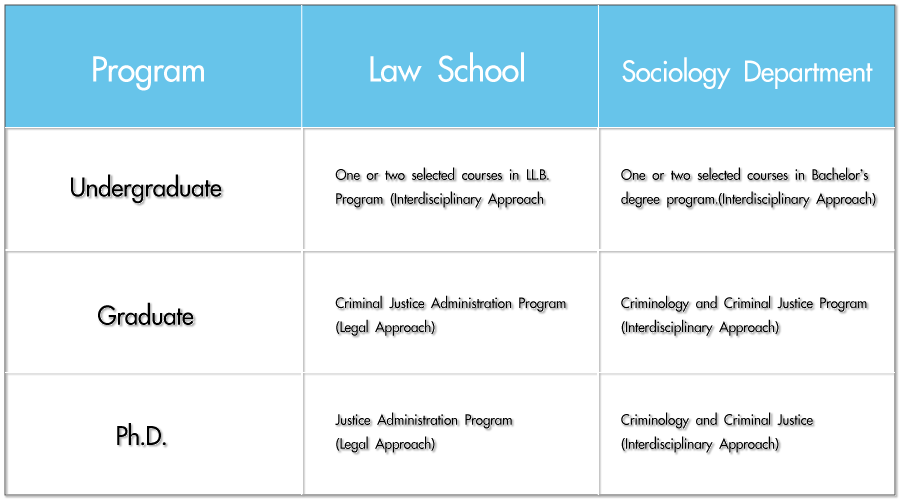 The Changing Face of Criminology in Thailand

During the past 80 years, it should be noted that the turning point of criminology study in Thailand did arrive at the Department of Sociology and Anthropology, Chulalongkorn University. After the long emphasis on the study of ordinary crimes such as murder, rape, theft, robbery, arson, burglary, drug-related offences, and so on, the criminology program then turned to mainly focus on the contemporary crime problems, particularly transnational organized crime, environmental crime, cybercrime as well as financial and business crimes.

As a matter of fact, some visible changes and developments with respect to theshifted focus of the criminology study in Thailand were clearly reflected in the Eleventh United Nations Congress on Crime Prevention and Criminal Justice, which was held in Bangkok, Thailand in April 2005. This event raised certain awareness and issues regarding contemporary and modern crimes taken placeglobally, namely the transnational organized crime, economic crime, cybercrime, environmental crime, etc. It is worth mentioning that there were several new organizations in Thaicriminal justice system established in order to cope with these types of crime, for instance, the establishments of the Department of Special Investigations (DSI), Anti-Money Laundering Office (AMLO), Transnational Crime Coordination Centre (TCCC) of the Royal Thai Police, and the Centre Against International Human Trafficking (CAHT) of the Office of the Attorney General.

In terms of academic world, the study of criminology has considerably developed and expanded. The modules and programs for Master’s and Doctoral Degrees at Chulalongkorn University have been revised and developed in various aspects in order to be in accordance and keep up with all the changes in criminological spheres, including an opportunity to specially focus on new areas, such as international criminology and business criminology, rather than a traditional emphasis on the criminal justice administration which isvery familiar to most criminology students.

At Department of Sociology and Anthropology, Chulalongkorn University, the Business Criminology course discussesdifferent types of financial fraud,illegal stock speculation, insider trading, infringement of copyrights, money laundering, and forensic accounting and investigation. This course also includes the prevention and control on financial and business crimes. Regarding the International Criminology course,its emphasis is on the study of transnational organized crime, environmental crime, cybercrime, human trafficking, terrorism, drug policy, and international cooperation including the organizations dealing with both international and transnational crimes. On top of that, Criminological Theory, Criminal Justice Policy and Administration and Research Methods coursesare compulsory in order to be a background for the area study.(4)Hence,it could be said that the criminology study at Chulalongkorn Universityis very up – to –date and well prepared for being a center for international courses in international criminology and economic criminology in Asia in the near future.

The changes in the study of criminology in Thailand, in particular its focus, modules, and course material, led by the Department of Sociology and Anthropology at Chulalongkorn University, can be viewed as the turning point which allows more students from different educational and professional backgrounds to step into a new era of criminology study. To put it simply, nowadays this field of study does not onlyattract the interest fromthe law enforcement officers, but also the businessmen, bankers, diplomats or even those working for specific organizations and NGOs. Timeline of criminology study in Thailand can be seen in Table 2. 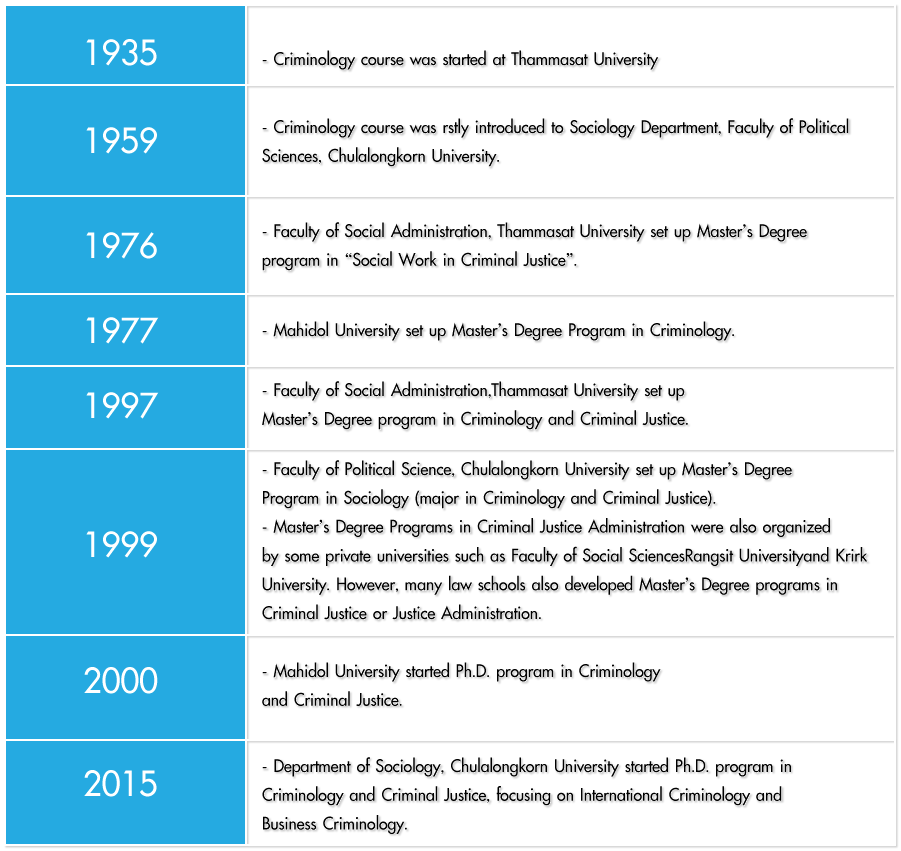 The criminology study was first introduced to the Thai academic realm as a part of law and legal studies; henceforth, over the course of 80 years, criminology has become an integral part of legal science in Thailand. In addition, its growing prevalence has also been recognized and drawn upon other relevant fields such as those in sociology and multi-disciplinary studies. Accordingly, it could be said that the study of criminology has now been expanded to the extent that it allows and calls for well-founded master’s degree and Ph.D. programs. Also, many pieces of criminological research and studies havebeen widely carried out. There is plentiful evidence manifesting such a development and astounding accomplishments in criminology study.

Having said that, it is undeniable that the criminology study in Thailand is still very much limited and not well equipped with sufficient knowledge in order to originate its own theory and become a school of thoughts on such specific field of study. Nevertheless, certain positive changes and improvements have been witnessed in study of criminology these days. To give some examples, the focus of the subject has now shifted and reached forward, from a study of basic criminology to an advanced one. Additionally, there is a remarkable expansion of knowledge concerning criminology which can be found in several programs of studies in Thailand, for instance, the International Criminology and Business Criminology courses.

3. Mahidol University set up Master’s Degree program in Criminology in 1977.