While the first Scout Movement in the world was founded by Lord Robert Baden-Powell of Gilwell (1857-1941) who set up the experimental camp attended by only 20 boys at Brownsea Island in Dorset, England in 1907[1], in Thailand the Scouting was formally established by His Majesty King Vajiravudh (King Rama VI) in 1911. As such, Thailand was considered as the first group of nations initiating the Scout Movement which has been growing and satisfactorily progressing, especially in schools and in various institutions which put Scouting in different levels of training programs, including prisons and correctional institutions

The Scouting behind bars in Thailand was started up due to the belief that the Scouting could be a method to shape and alter the behavior of prisoners as its philosophy focuses on teaching people to be good citizens, well-disciplined, honest and dedicated to public. To put it simply the Scouting was an appropriate program for all prisoners to attend. However, there were some difficulties and limitations in bringing Scouting in prisons, in particular the prison’s physical environment, prison rules and regulations, as well as the personnel issue. Because of these, only a few countries could be successful in establishing the effective Scout Movement behind bars, but one of these is Thailand 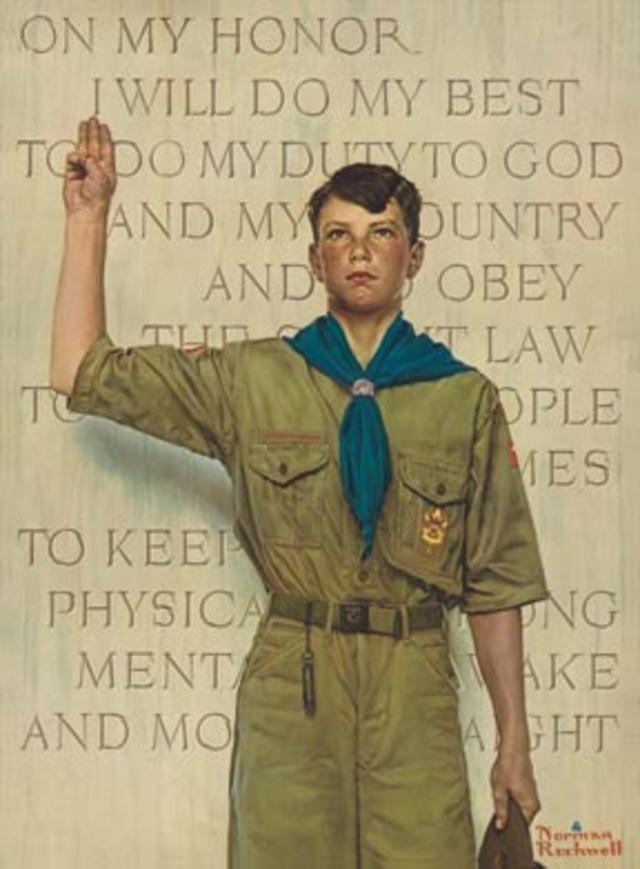 After the success in running the Scouting in Nakorn Pathom Central Prison, the program had been replicated in other prisons, especially in Huai-Pong Open Prison[3]: the pre-release institution where most nearly released young offenders were incarcerated. Here, the Scouting was very focused and seriously run because of the fact that the settings and environment were more appropriate than all other closed prisons. At Huai-Pong, a district in the eastern part of Thailand, there were large surrounding areas to build the camp fire, to have the trek and fieldwork trainings and to do community service in order to help people in an outside society. Accordingly, it was found that the Scout Movement achieved considerable success since the prisoners had more disciplines and were very proud of themselves in that they were fairly helpful for society particularly the role of security guards in which the scout prisoners in Huai-Pong Open Prison were usually asked to perform at various public events and fairs in Rayong Province. 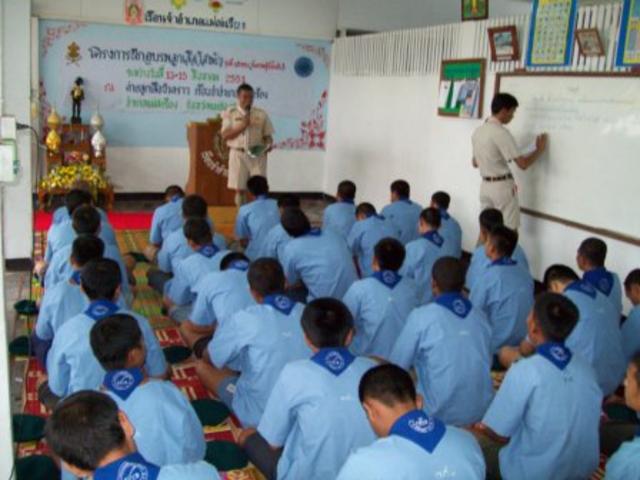 Nevertheless, the Scouting in prisons had been disappeared for a period of time, until 1978 when there was an establishment of the first ‘Rover Scout Troop’ outside schools and academic institutions, named ‘Buddhakasetranuluk Rover Scout Troop’ by selecting 72 young convicts who were in a good class (meaning that they were well-behaved in prisons) to be trained. The opening ceremony was presided over by Mr. Thawee Choosap, the Director General of Department of Corrections. It became that this Scouting program represented an impressive achievement and received great complements from various sectors in setting the event[4]

The Scouting behind bars these days is composed of 3-4 training days aiming to provide prison inmates with disciplinary training to live peacefully in society, to be responsible for themselves and society, to have personal ethics and integrity and, most importantly, to willingly sacrifice to wider society. By doing so, it is believed that the group-based activities for Scouts can change the inmates’ behaviors. The Scout members in each group shall be trained to be responsible for other members’ behaviors and to live harmoniously together. The daily activities range from trekking to a group conversation in the morning session which is a good opportunity for all members’ behaviors to be monitored and guided to conform to the social rules. The outdoor activities and the community service include the cleaning of the temples or public roads outside correctional facilities which help the inmates to work and give something back to community, as well as to contribute to the public

Considering the training package, there is a Basic Training Course for the troop leaders (B.T.C), designed for prisoners to attend a 4-5 day camp covering 25 -30 hours. The course outline composes of 2 substantive groups of subjects. First, the substantive course for Rover Scouts is formed by 13 subjects, such as main themes of Scouting, camp fire, the roles of Rover Scout Patrol Leader, the First Aid training, and the roles of the Rover Scoutmaster, and so on. The second group of subjects is 9 compulsory subjects: Thailand’s history, The Royal biography and the Royal duties of H.M. the King of Thailand, civic duty, life skills, dangers of drugs and self-development activities, etc 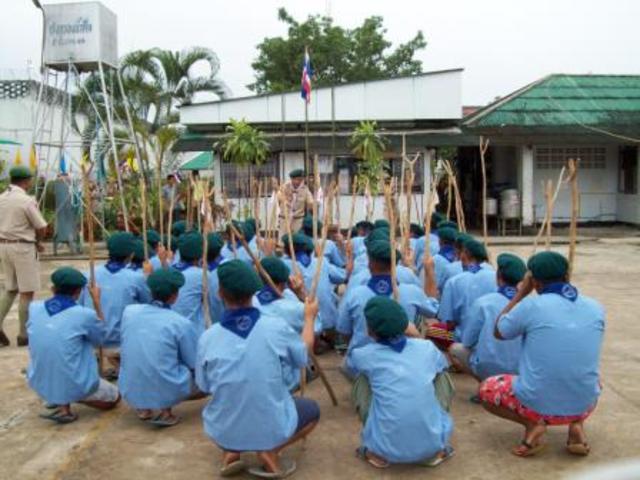 Obviously, the abovementioned training package aims to specifically train the prisoners in terms of Scouting activities and behavioral changes. However, it should note that the achievement of the program critically depends on the continuity of the training in each prison. In other words, it is up to the prisons to whether keep running the Scout activities after the end of the training course for the Rover Scout Troop Leaders or not. By continuing the program, the prisoner scouts can have advantageous activities to work for the public and go through the group-oriented process to change their behaviors continuously. Nakorn Pathom Central Prison could be an outstanding example of the continuity of the successful Scouting by setting the ‘Buddhakasetranuluk Rover Scout Troop’.  After all, it does not seem to be an easy task for other correctional facilities because of some major obstacles: the prison settings and its physical environment which are quite narrow and insufficient. In addition, the understaffing and the lack of budget are also the problems which affect the continuity of Scouting behind bars. However, with respect to the advantages of Scouting in prisons and its achievement on the grounds that the training is seriously run, the Scouting has been, therefore, set in many prisons and correctional settings up until now for more than 50 years. In a nutshell, although the Scout Movement in Thai prisons seems to be thriving, the beneficial effects of Scouting behind Thai bars towards the rehabilitation of prisoners tend to primarily rely on the solid support of Thailand Department of Corrections and its policy in each subsequent period of administration 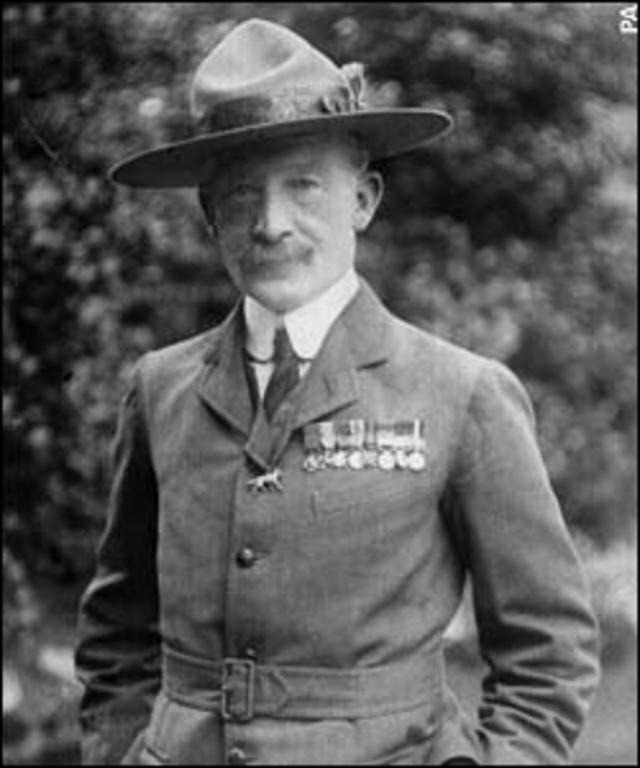