The state of prison overcrowding has arisen for long time in Thailand. In the early stage, the prison overcrowding problem was not much clear. Until in 1992 the drug policy change, the number of drug-relating inmate has increased dramatically. This has led to escalate overpopulation in prisons. 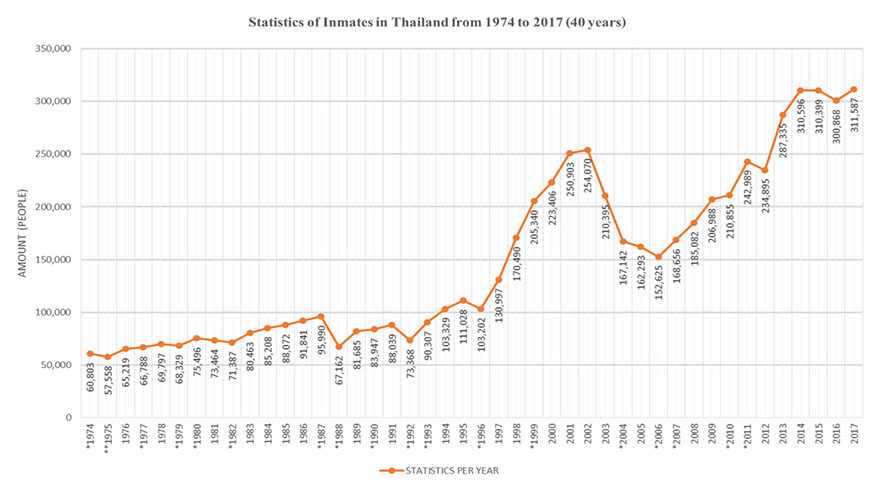 Considering the statistics of prisoners in Thailand, in Tale I it can be seen that it has increased over the past 30 years. However, the decline in prisoner number occurring in some years can be also explained by a key factor: the collective Royal Pardon which is usually given to the prisoners during various natioal celebration events, the inmates having short remaining sentence terms will be released.

Nevertheless, from 1996 to 2002, there was a dramatic growth in number of prison population in many consecutive years as there was change in the criminal policy especially the urgent measures for combating the spread of methamphetamine in Thai society. The methamphetamine became listed as the crucial and serious type of illicit drugs and those using it would be penalized and sentenced to prison. Unsurprisingly, more and more drug offenders, particularly drug users, were sent to serve tome behind bars.

the decrease in prison population could be observed during2004and 2007. Particularly, in 2003 when the total number of prison population was declined was declined from 254,070 to 167,142 in 2004. The crucial factor was the implementation of the Narcotics Addict Rehabilitation Act B.E.2545 (2002). Under this law, the drug users who needed a drug treatment. The diversion scheme was applied to take them out of criminal justice system and be treated in the military camps or rehabilitation centers or be on probation instead of receiving the prison sentence. Because of this, there were almost 100,000 inmates being from prisons in the next following year.

The state of prison overcrowding is a consequence of the rising number of inmates, while the prison capacity has not much increased comparing to the ratio of inmate to capacity. In the past 20 years, starting from 1996, there were 103,202 inmates, and then in 2017 there are 312,855 inmates in prisons. Therefore, it has been an increase of 200,000 inmates. However, the capacity of prisons in the last 20 years has increased only for 102,400 inmates with the construction of a new, larger, 24 prisons ex. Chiang Rai Central Prison, Rayong Central Prison, Klongphai Central Prison etc. for replacing those aging prisons, and building 22 prisons under the new function plan. Furthermore, there are 31 prisons that have been expanded in the prison wing size, but the increased capacity still could not add up to facilitate enough the fast growing number of inmates of the past 20 years.

However, in considering the prison overcrowding in Thailand, there are some points to be concerned; that is, the criteria used to determine the prison capacity are somewhat different from those of Western countries. Like, Thailand criteria do not consider the prison capacitybased on the number of beds used by inmates, because inmates do not sleep in bed. Instead, inmates sleep on futon in the dormitory style. Thus, consideration of prison capacity is specified by the space appropriate to sleep in each cell, which is 2.50 square meters per person. When calculating the area in individual cell, it considers that how many inmates can be accommodated. The excessive confinement resulted from such consideration is considered as being exceeding prison capacity.

Facilitation to inmates in Thailand the futon and dormitory style in either a small or large cell is considered a culture of Thai people, especially in the countryside. Inmates do not prefer to sleep in a single cell. Usually, a single cell is considered for prisoner with problem or under disciplinary punishment, which segregated from other inmates.

In addition, considering only sleeping area, without including other utilized areas is likely to be assumed that prison maybe small with a large sleeping area and inadequate space for other activities i.e. canteen, vocational training area, gymnasium facilities.On the other hand, some prisons have less sleeping space, but other living space is wider and more than enough for the number of inmate. This shows that criteria on prison overcrowding could possibly be misleading.

Another point to be concerned about prison overcrowding in Thailand is that inmate overpopulation occurs in some prisons especially prisons located in large cities, where concentrated population resulted from migrants to live and work. In contrast, prisons in remote provinces or small towns the congestion is lessened. The regular prisoner relocation measurement could not be fully achieved because it impacts the relative visitation as most inmates demand to stay in touch with their families.

Prisons in Thailand encounter prison overcrowding is mainly a result of the increase in drug-relating inmates, which takes up to 65 percent of entire prison population. That is to say, in the number of 320,000 inmates, 200,000 inmates are drug-relating inmates already. In spite of the change of the law in 2002, by which the drug inmates were considered as patients and treated in non-custodial measures, this brought down the number of inmates in the first 2-3 years, but after the number of inmate rose sharply than ever. Most of inmates were minor drug dealers, not the main drug traffickers. Many parties debated about the failure if the “War on Drugs” policy and sought out new measurements in dealing with drug problem instead of suppression measure.Attempts are made to introduce the decriminalization of narcotic drugs and the modification of judicial procedures, which focus on offenders' behavior rather than considering the number of tablets or doses of narcotic drugs. This is to be subjected to follow up, because the solution to drug problems in Thailand is also the solution to the prison overcrowding problem.